We have exclusive 3G GPS Trackers available for countries/networks where only 3G is usable. But just to explain why 3G is necessary (and to reassure everyone else that they are fine with 2G), here is some relevant information to help explain.

2G is still perfect for people in the UK, Europe and most other countries

2G has been around since the 90s where it was the most common standard for wireless mobile phone communication. It allowed text messages, picture messages and simple (WAP) internet usage. All those old flip-phones and the first Nokias that people had were 2G devices.

As internet usage became more common, 3G became the next generation standard, allowing more bandwidth of internet. Now we have 4G and 5G, which allow broadband-speeds of streaming for insatiable internet users on the move.

Our popular standard Stray Star GPS Tracker, like most simpler devices using a cell phone network, uses the 2G network – which is perfect for its mostly-text-message based usage, and the incredibly small and simple data uploads for customers wishing to use online (internet) tracking. It actually still has benefits over 3G and 4G because it has a much wider range for rural areas for example.

The UK and Europe are not planning to discontinue 2G for many years yet – there is simply no need to (and yes, this was written and updated in 2021, don't worry about it being old info!)

3G is necessary for people in the US, Canada, Australia and New Zealand

Some network carriers in other countries have started to discontinue support for 2G devices. For example, the monopolistic AT&T in the US. They've long been pushing their customers toward 3G/4G devices – so any of the older generation perfectly happy with their simple 90’s Nokias would need to upgrade to smartphones (and 2G GPS trackers would no longer be operable).

The countries that are discontinuing support for 2G are doing so to “make room” for the greater demands for 3G and 4G, because for various reasons their networks aren’t as well resourced as EU/Eastern territories.

You can see a list of the countries and relevant network carriers here (Wiki article, opens in new tab). 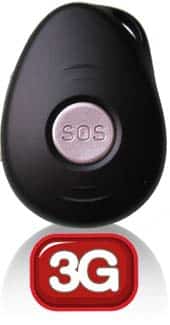 In the UK there is a mobile network called “3” which is a brand name (like O2, or EE), and not to be confused with 2G or 3G. However, they have stopped support for 2G in the UK. They are the only network to do so in the UK, and don’t worry, other networks are not about to follow in their footsteps. But, if you do desperately want to use 3 for any reason, then you will need a 3G device.

If the user is travelling in 2G discontinued countries, then yes, they will need a 3G device

If the person you are wanting to track is about to travel the world for a year and will be travelling in US, Australia and Canada for long durations, then you might want to get a 3G device to make sure that you are able to track them the whole way. If you are UK based though, then be aware that you cannot have a device that works in both the UK and US - this is because the 2G devices are on the 900 bandwidth, and 3G devices are either on the 850 or 900 bandwidth - UK is 900, American is 850, so one device can't cover both areas.